Well these are specifically for Saga, although as usual I have kept them pretty generic so they are usable in many games. I apologise for the normal poor quality of the photos compared to others fine efforts, but they seem to show it off well enough.

I have included a conquest games plastic figure for some sense of scales. Hello to Bob, the epic Flemish mercenary.

First we have an update to my field, I have shown this before, but now we have the addition of some haystacks to dress it a little. They were from some childs playset, and fit nicely.
I always leave the scatter objects fully removable so they can be moved around at will, and are more for the visual than actual game play (this is as in Saga, for something like Empire of the Dead they would be as situated of course during the game).

Next up we have my new and improved rocky ground. Again we have moveable rock pieces, for the ease of game play in various systems. First picture is rocks on, second picture the rocks are on the side to show what I am babbling about.

Next we have my newest addition, a swamp. Nice and simple one this. The wet land is just blue paint, washed over with green, then a gloss varnish to give it the wet look. It came out rather well.

Finally, a shot of some trees on my generic wood area bases. The trees I was given yesterday, so the bases have just been textured and await painting when dry. Also included are my three Baggage pieces as they where about when I took the picture. 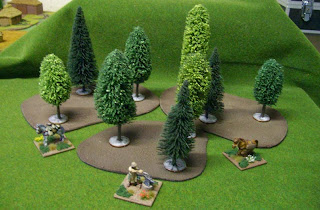 Most of the bases for these are cork tile. cut to shape with scissors, sanded smooth then textured with pumice stone mix. Flock was added in stages with pva glue, to avoid any chance of warping. Once everything has dried, they become very solid.

As I keep the items on top removable, it also means they can be used as more forest bases too in games where heavy woodland is appropriate.

Email ThisBlogThis!Share to TwitterShare to FacebookShare to Pinterest
Labels: Saga