We have been getting a few games in lately of Muskets and Tomahawks. (well three)

We managed to do a practice and then demo game to a friend the other week, and got a great bash in today. We ran all three games at 400 points, and played the same scenario for each. The one where you must eliminate 2/3 of the opponents forces to achieve a victory, both players having the same objective.

This is a report of todays battle, from mainly my perspective as the English player.

The Americans did not want to kill the English Regular Officer, as he was a friend as a side plot.

The battle of Fry's farm. 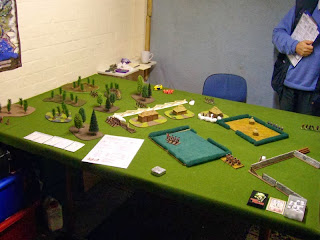 We join the action at the end of turn one for the pictures, but you can get the layout of the table from them.
You can also see my regulars which are fleeing on my right flank, and the American regulars which fled in the center. Not a day to be a Regular today, morale was certainly low for both units. 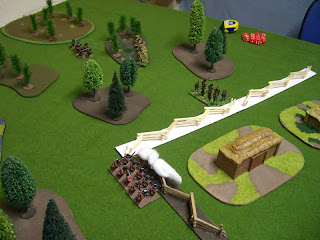 Here we see the Rangers poised on the left flank to take on some Indians, and the big English light unit which had blown a big hole in the American regulars. This is where it started to go hideously wrong for the English.
The rangers charged at the Indians, throwing ineffectual axes on the way in. They then proceeded to get butchered down to 1 man for no kills on the Indians. The Indians then got two activations. They Shot the running ranger and moved close to the Ranger Captain. He then got to charge them, and died although he did finally mange to kill one of the Indians. 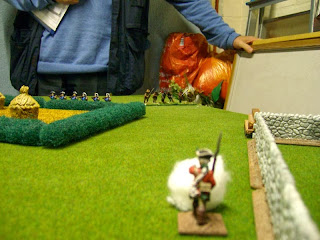 Atmospheric shot from the British Captains view. He was trying to hit a Rifleman to make them break.
"I see that scum Frenchy, but why are they not shooting at me?" 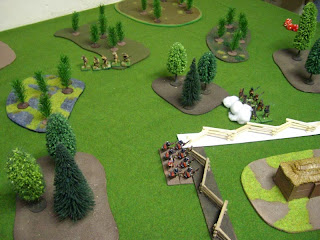 This duel in the center between the Lights and the Minutemen was only going to end one way. The Minute men fled later on . Those pesky Indians on the left flank though pushed the lights back countless times an out of position from this point onwards. 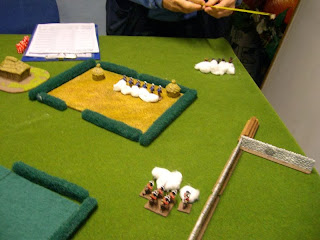 Back on the Right flank, the English regulars kept getting slowly whittled down, while mostly missing themselves. The French help their Riflemen mates to take more English regulars down, before turning their attention to the center 8 man Light infantry section. 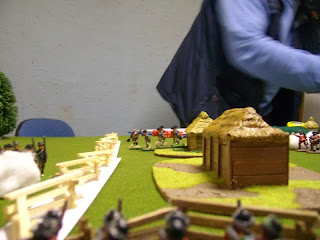 The English tried a neat ploy here, but the cards let them down. They advanced the 5 Lights in the center to charge range of the American Regulars rather than reloading. Sadly the Regulars went one card before the Lights. And shot 3 down, pushing the last 3 back.
The Lights did eventually manage to get the Charge on the Regulars. If you look at the next picture you can see the result. Yes, I lost two men to the one American regular, and fled. 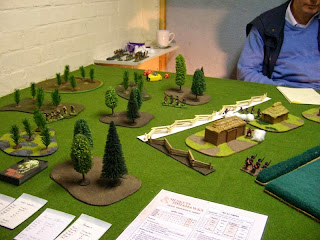 Just before the end of the turn, I managed to make the Riflemen flee, as seen in the next picture. Sadly not before my Regulars had been reduced to just 2 men. This reached my loss point of the game. so at turn end, I was six men short of killing enough Americans. 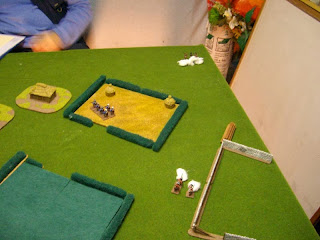 Final result was a Major Victory to the Americans, who achieved their mission and their side plot.

Another great and close game.

Our other two previous games both ended in draws, with both teams reaching break point in the same turn and none achieving any side plots.