More EoTD and some Urban War.

One of those days when a few posts all crop up together.....Here are a couple of pictures of the Lyacon gang I threw together utilizing a few Old figures out of the "out of the way but not totally worthless" biscuit tin. Mostly painted a few years back, a couple of arm chops and painting brought them back to life. The Packmaster is an old Horrorclix figure, I chopped its clipboard out of his hand with a scalpal, and again a speedy repaint, brought me to completion. The Leader is the Reaper Bones werewolf, super cheap, but a superb figure. I have two wolves to finish this faction, no picture at the moment. One is the wolf from the Salute show that had a goblin rider. I finally found a use for him. I must find the other one I have somewhere, they look pretty cool. For now the other is an Old GW one I had spare. 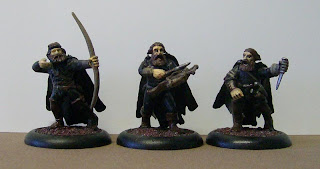 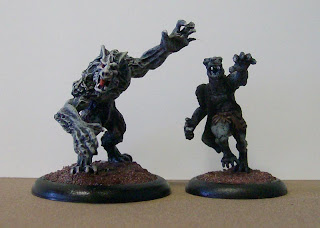 Also featured are some of the Urban War Viridian figures I mentioned a while back I was painting. Not much to say reguarding these, other than I still have 3 basic warriors to go, but they are actually quite nice simple figures to paint once i got in the zone with them. 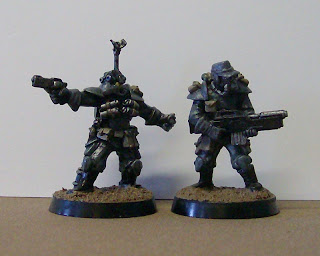