AWI - The Battle of Roark Farm

We fought a wonderful game of Muskets and Tomahawks the other day, and I actually got a few good photos of the action to show.

The Americans consisted of -

They had the mission Raid, with the side plot Rancour (The Officer was to send one of the units to their death). We decided it would be better if I, as the British player, did not know which unit The Americans had selected to be destroyed.

The British Consisted of -

They had the Defence mission and A Hateful heart side plot.

We decided that the game would be the Americans trying to burn down a farm (most likely the actual home of the British Regular Officer too) that the British were about to occupy as it sat on high ground and would provide an excellent vantage point over the surrounding area.

The British had two units on the board, accompanied by their officers, The Regulars and the Rangers. I elected to deploy the Regulars as if they had just marched up the road into the main farm building area they were about to occupy, the rangers had pushed through towards the big farmhouse, obviously scouting slightly further ahead.

Suddenly the area ahead was full of American troops...The first card drawn in the activation sequence was the American forward boys card. So with a shout the game started with the American Officer ordering his men forward...Very apt. 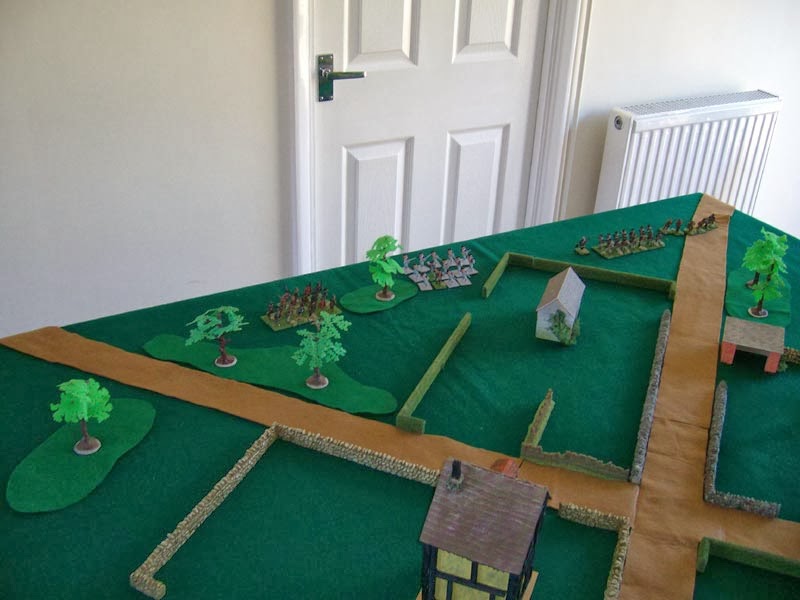 The Americans head to the buildings 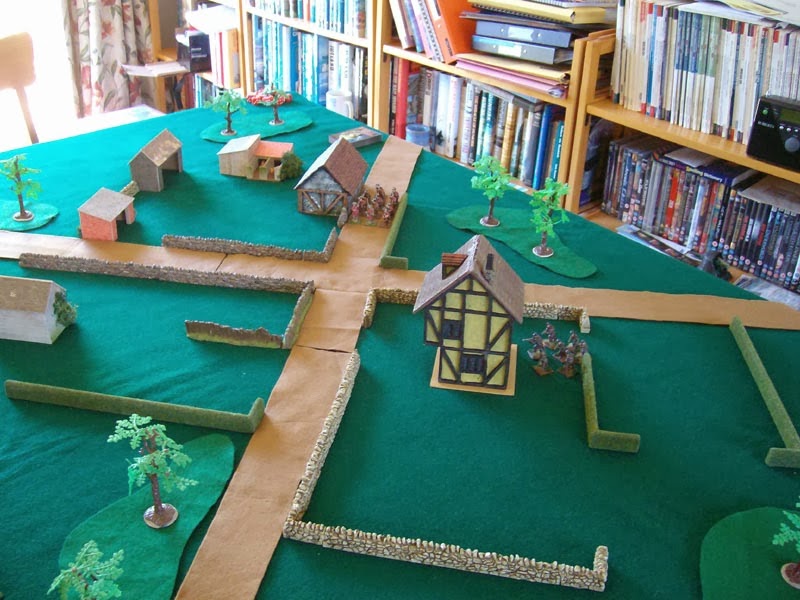 The Rangers march up to the farm house 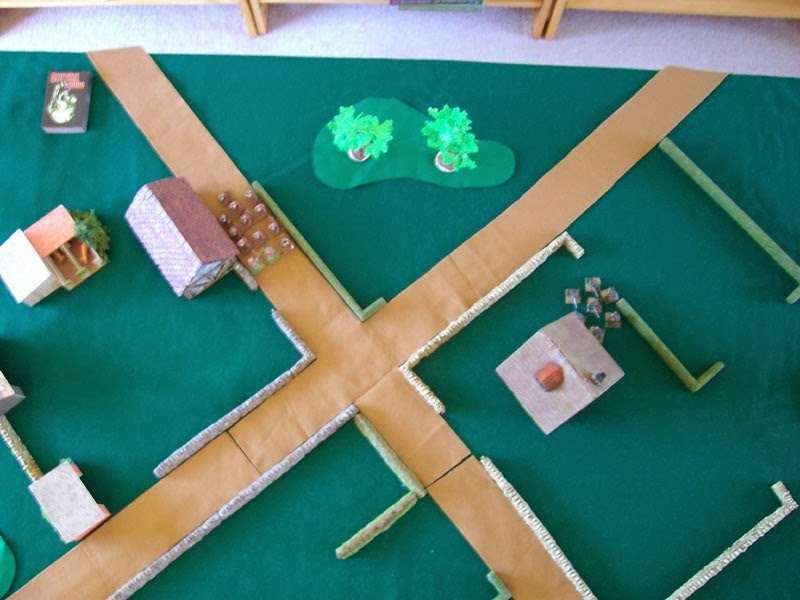 The British regulars stroll up the road to the farm. 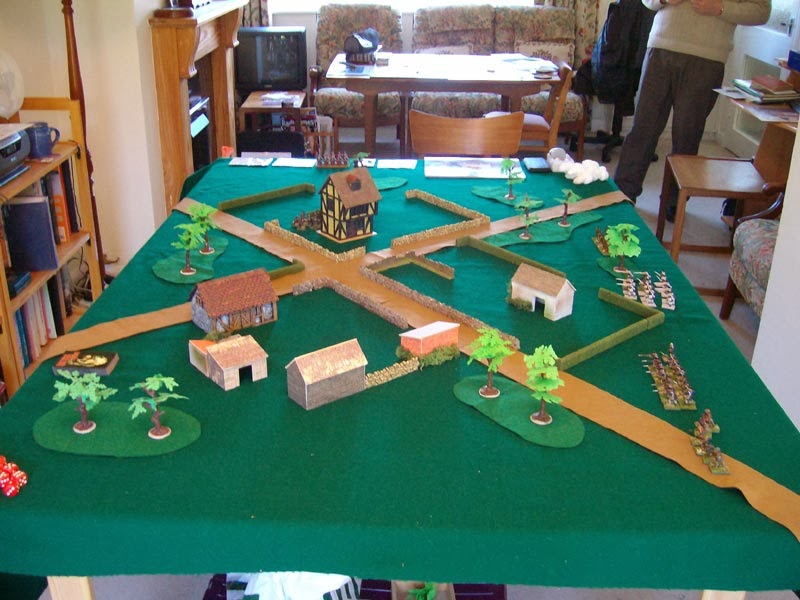 Ready for the off. 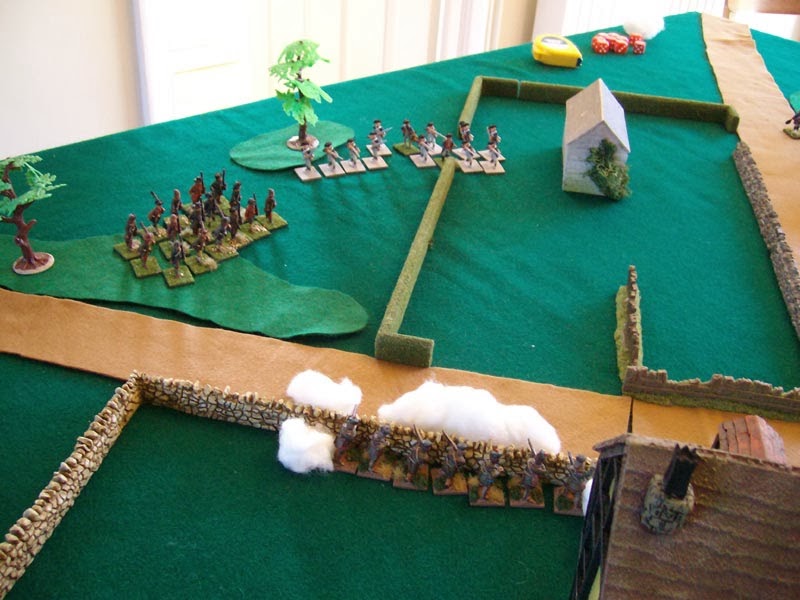 Rangers hunker behind a wall and engage
the enemy formations 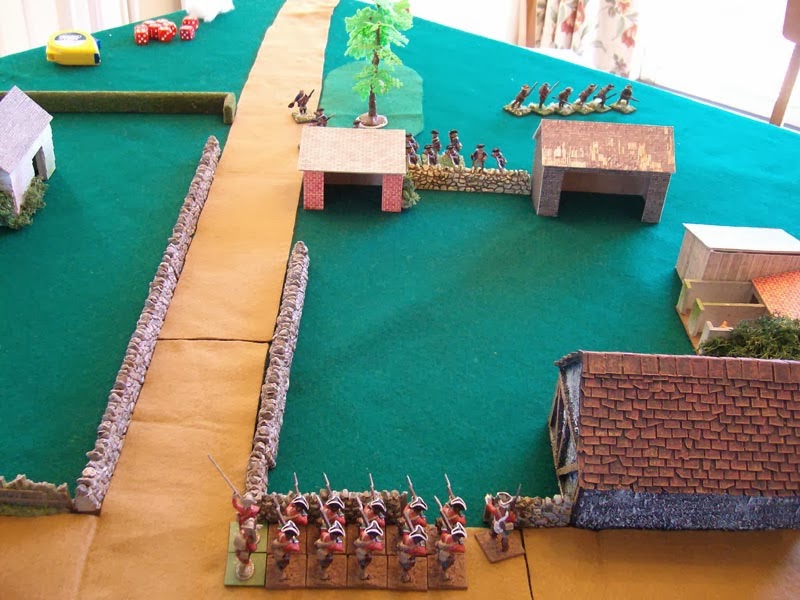 The Regulars face off. 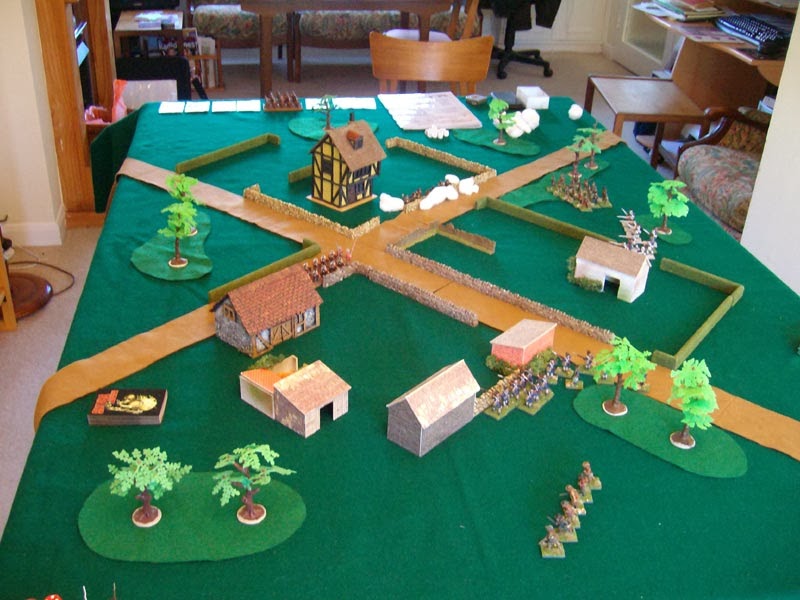 The start of the second round. 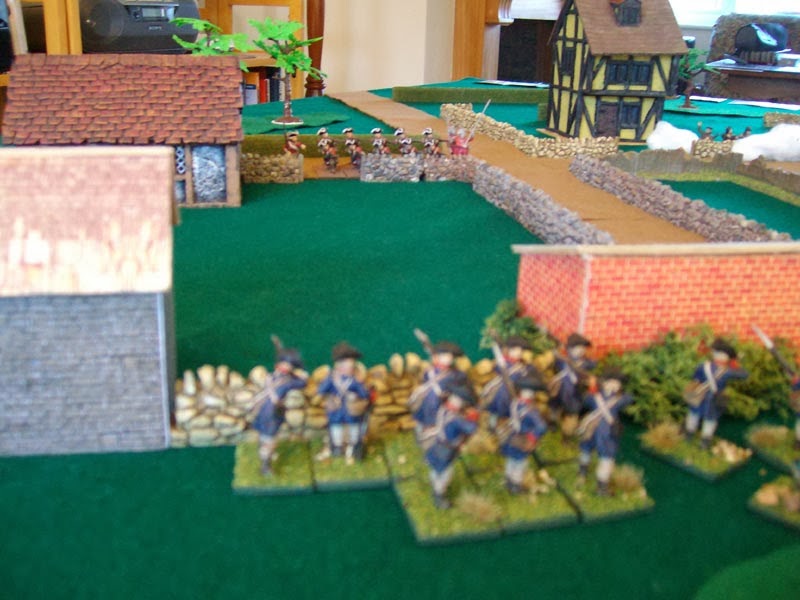 The face off continues 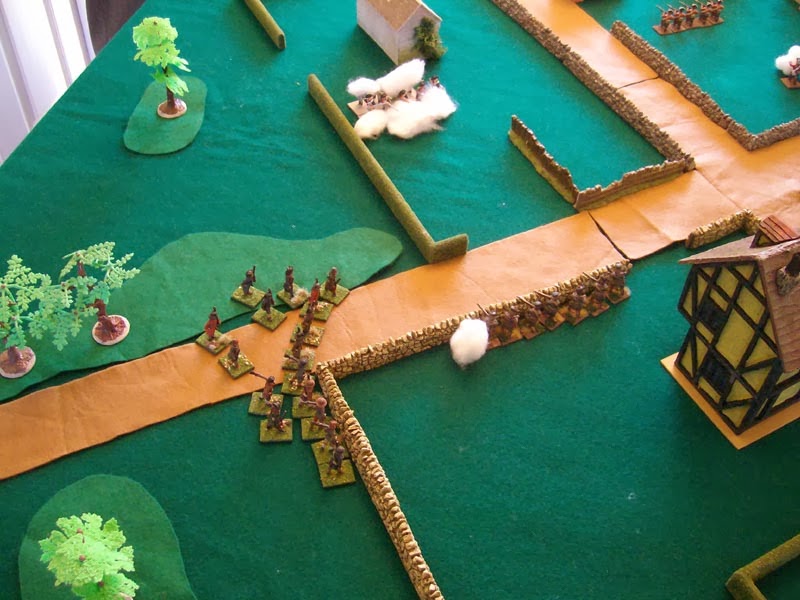 The rangers are looking to be outnumbered 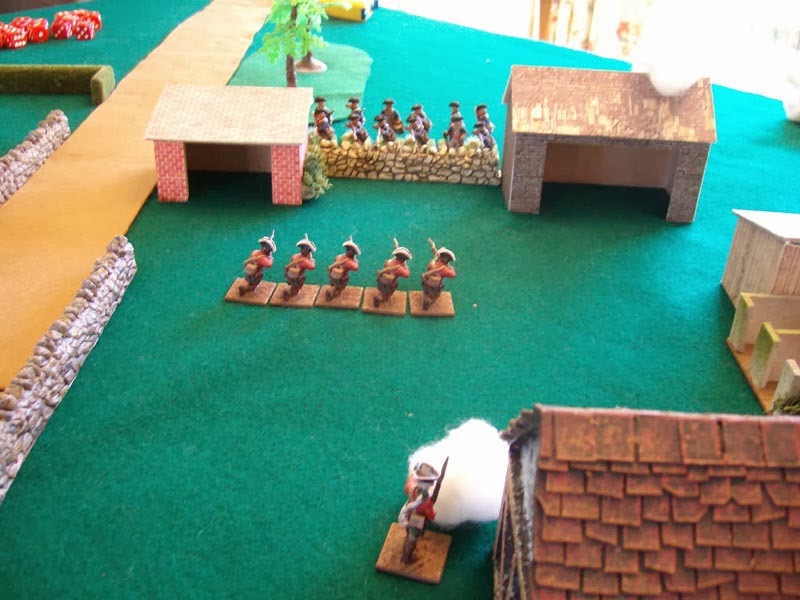 The British try a different approach, but are shot
down due to a bad leadership decision. 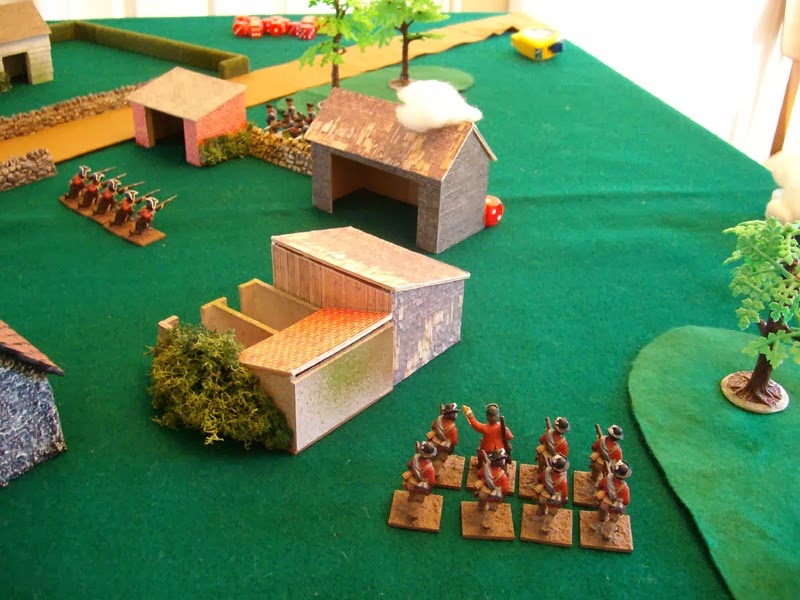 Fortunately the Lights appear to reinforce the flank,
gunning down the riflemen.
The first building starts to catch light though. 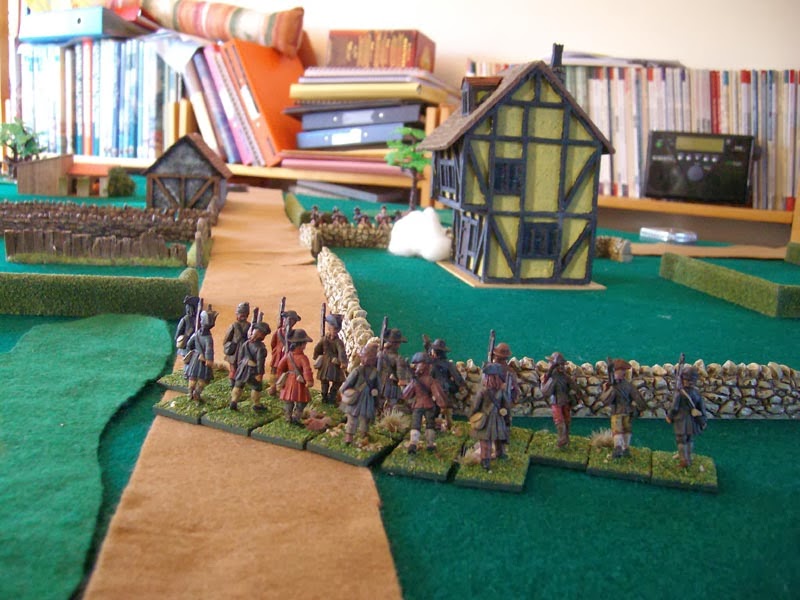 The other Light section arrived and reinforced the crumbled left flank. 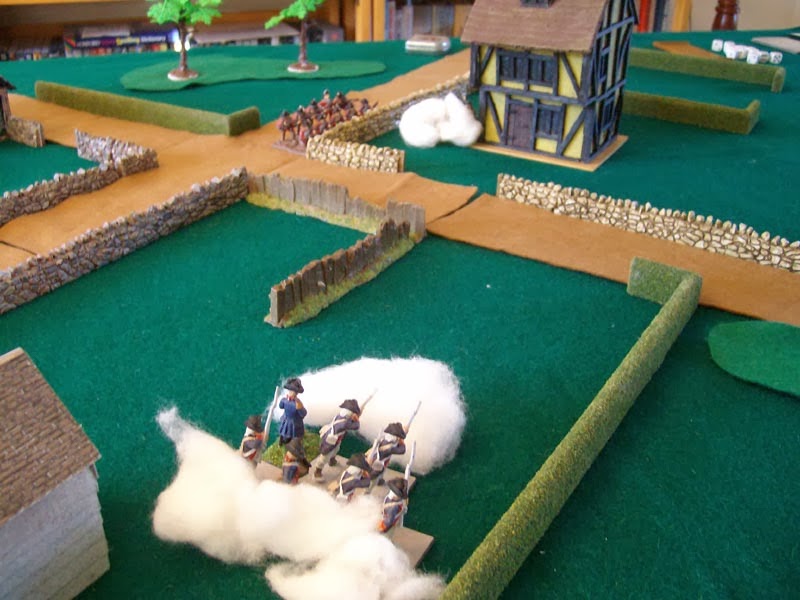 The Ranger Captain plinks the odd shot off annoying the regulars in the center still.
See his smoke by the Farmhouse. 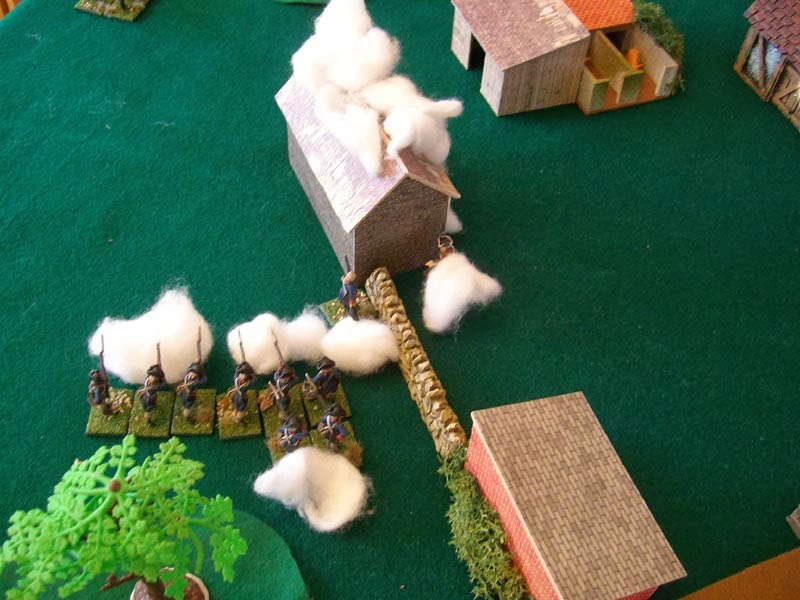 The barn burns.  The regulars turn their attentions to the Lights. 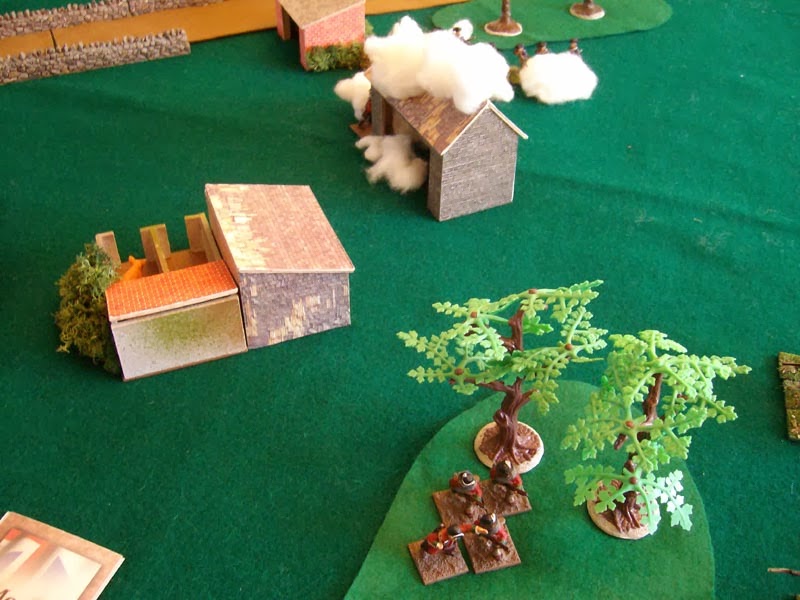 Who flee into the cover of the woods 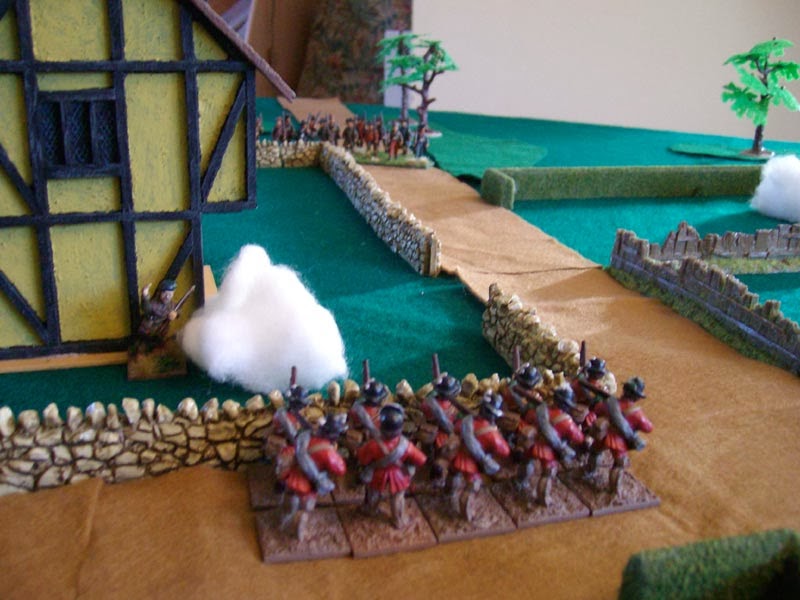 The Lights in the centre keep the Militia pinned down in the middle of the board.

It was at this point an event happened. It caused the turn to end. At this point the British rolled a double 1 and the game officially finished.

It was a Minor Victory for the British, but at a great cost in manpower.

They had kept the majority of the farm safe ready for their main forces to use it as a camp and observation point of the surrounding area.

Interestingly, the American Officer had decided that the Provincial Militia were fated to die in this game. Clearly not a fan of their particular state. Sadly the British had failed to help the American out here, killing about two of the fellows only.

We played an extra round after this, just to see if the event had changed anything in particular, It had not. the result was the same, albeit with a few more casualtys on the British forces. The Militia just failing to totally get the farm house on fire, though it was very scorched. (they needed one more action to set it ablaze....)