Well I see lots of 1/2 year reports on some of the blogs I visit. Perhaps I will jump on the band wagon a little here, and also show something I have been working on.

It is actually 5 months since I started this blog, and my attention has been a little diverted from time to time I will confess. From health issues with the wife, and other various home things, and my Saga duties and enjoyment, my M&T experiance has been very slow in coming to fruition. But slow is not always a bad thing.

I have been working away painting the odd figure and getting up to my target of two 300pt armys finished. Still not there yet but it is one of those things that is destined to be a wonderful diversion for me from the masses of Saga and other things I am working on.

The way things are so far =

So, they are getting there.

Something I am working on, for my French, is some figures I can use as Coureurs des Bois/Canadian locally raised militia.

To make these, a brief bit of explaining. Early in the year I got very lucky on ebay and won a dirt cheap bid on 24 Front Rank British Light infantry. (actually they are called Battalion Company, but they will do as Light Infantry for me) (basically the guys are on pictures 1,2 and 8 here - Link to Pictures

Now my poor French are lacking in figures compared to the British, and as I was looking at the 6 figures I decided I would adapt them for my French forces. Chopping the hats a little, and some green stuff work presented me with some home made Canadians. Hope you enjoy, I mostly finished the first one today. Just a little touching up of the leggings and some basing and we are good to go. 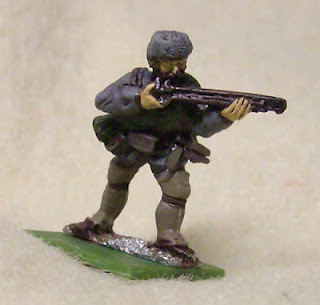 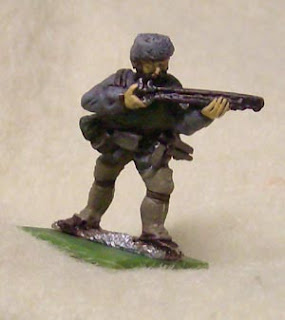 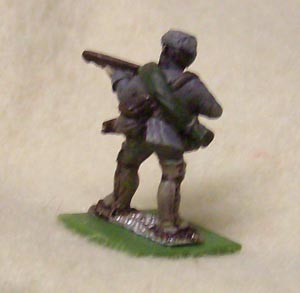 I think he has turned out quite well, and certainly has a bit of a trapper look about him. Just leaves 5 to go..