Very long overdue for a post on my blog.

Life has been going along reasonably well. I have been up to my neck in lots and lots of Saga related stuff though, so my M&T has taken a bit of a back burner for the moment.

I have slowly been adding painted figures to the mix though in preparation.

Here is a shot of the Indians I have for my British Forces. I got these via a trade on the Lead Adventures forum. Very nice figures that were enjoyable to paint. They fit in well scale wise with the Front Rank stuff, just being a little leaner in appearance.

I also have the first two of my British Regulars painted. One of the guys (the one in the back of this picture) decided to jump off the table, which broke off his bayonet. Rather than try fix it, I decided to file the end down more and utilise him as my leader figure for the unit. (he now stands out as the only one with no bayonet) 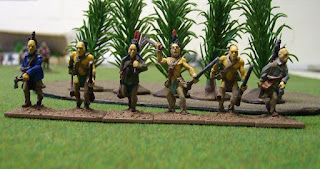 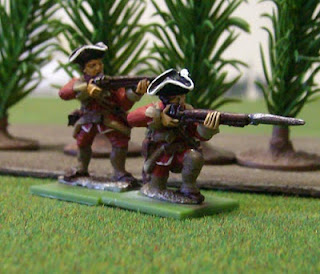 I also have two French officers painted, two of my French marines, and 13 Indians (all front Rank) for my French forces done. (7 Indians done by me, the other 6 done by my friend Stu exceedingly well). Sadly my camera eats batteries so these were all the shots I could get at the moment.

In other developments, another friend of mine has nearly completed his AWI American force, so a game should be in the offing very soon.

More to come soon, when my Saga works and life allows,