Side plots - British Regular officer needed to end the game in the house with no enemy units, American officer had to leave the table from the British deployment zone.

Here is the table after deployment all ready to start... 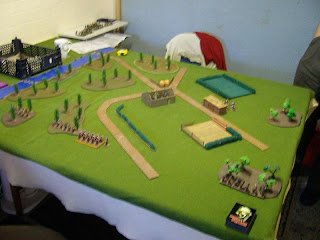 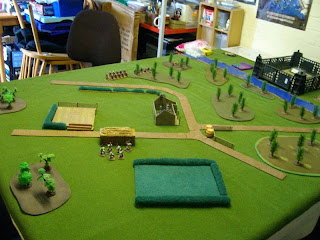 Much movement took place in turn one, with a few ineffectual shots fired. Clearly my excitement levels rose here as the photos all went blurry for a spell....We rejoin the action photo wise at the end of turn two. What had happened - Well the British had had a very poor turn. The regulars had assaulted the building only to be repulsed by the civilians within. The Rangers had shot ineffectually on their right flank at the civilians (the 6 Indians in white coats) and where then repulsed by a devastating round from the advancing American regulars. The other six rangers had also fled from the one casualty caused on them by a civilian in the house with his musket. They did at least manage to make the American Indians flee first though 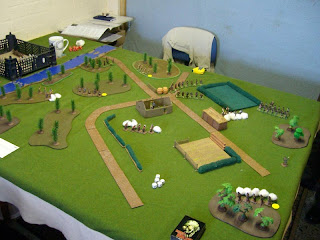 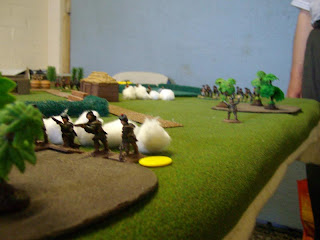 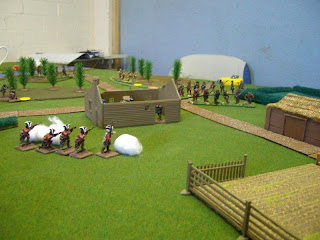 The next turn brought fortune to the British side though. The Lone officer manged to charge the building, killing all the civilians and then their officer in melee. The building was his. All he needed to do was stay there.
The Rangers on the British right and then their officer were swiftly dispatched by the American regulars though. A gun dual ensued on the left flank between the minutenmen and the regrouped rangers, But more minutemen and some riflemen were pushing up the center of the board. 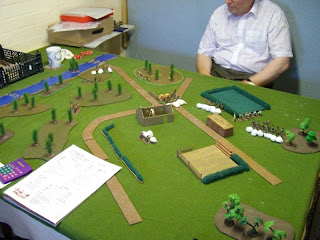 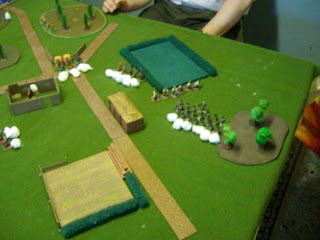 The indians get the jump on the Minutemen in the center. Firstly they make them flee, then they break cover to try and finish them off. Just in time, as they threatening to swamp the lone officer in the building. 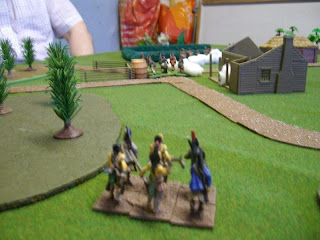 The Rangers (I used the cois de bois figures) drove off the other minutemen by taking them on in melee combat, all shooting seemingly ineffectual on that flank. They would eventually manage to get deep in the woods and finish them all off leaving just 4 Indians on this flank for the Americans.

In the center of the board, the two remaining British Regulars managed to outshoot the riflemen and cause them to flee to the field in panic.
Things suddenly were really looking good for the British, where upon their morale card was drawn. Realizing how outnubered they still were, The officer decided to order a full retreat, and the remnants of the force withdrew from the table (I rolled a hell of a lot of 1's, only the Indians did not actually rout from the table lol, but still getting a flee result). 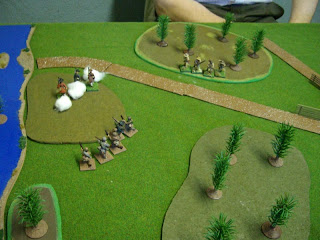 We called this an Impressive major victory to the Americans. They still had enough troops to achieve their objective and their Officer could achieve his side plot with ease. They also still had a full unit of 6 civilians on the table. I am sure they had bullet proof vests on. I hit them a lot, but the shot just bounced off every time.

Here are the figures left at the end of the game. (there are also 4 Indians in the woods to the left) 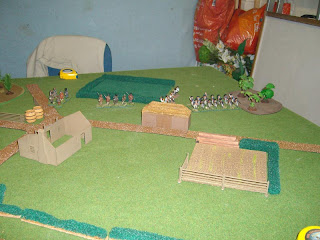 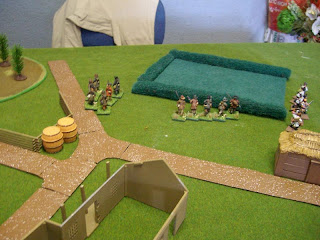 What a great day. I can see the value of the big cheap units to keep that morale card at bay for sure. But I did push him close to his break point too, so The British were certainly plucky.