Stu and I both greatly enjoyed it. Much fun was had by both players. It was that good I realised afterwards I had only had one smoke break during the game, and had neglected my photography efforts a little. I did capture a few images though which I will include. 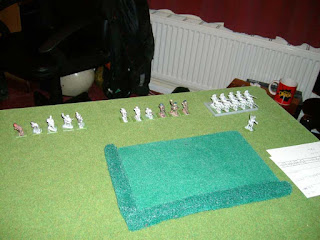 Objective - Scouting Mission
Side plot - Let us thwart their plans! 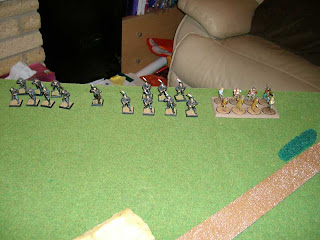 Here is the table with the scenery all ready (armys are not deployed yet, just there at setting up) - 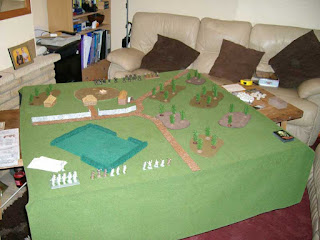 And here are the cards all shuffled and ready. Sleeves were supplied free by a friend. Oh dear... 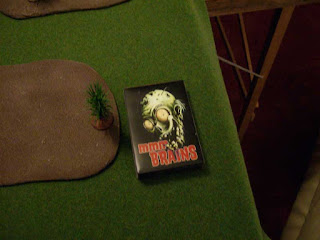 The Canadian force deployed spread across the table, militia and officer by the buildings, provincials in the centre  and militia heading into the wooded area, whilst the British had to move on from their edge.

Now I do not think this is not going to be a very in depth and stunning report I am afraid, I was too busy having fun and checking the odd rule to take notes (or lots of pictures) so apologies.

Basically the British advanced their Regulars and Officer up the centre of the board, the Indians advanced diagonally through the field on the left, and the Rangers took to the woods.

After a bit of jostling for positions, The regulars spotted a chance and opened fire on the Provincial unit.
3 Provincials died, and they fled back towards their lines. You can see them running in the following picture, although the poor Regular troops had gotten a bit decimated by fire from the Canadian militia and officer behind the wall. The regulars remained steadfast in their position though. A few reloading's had taken place before the picture was taken. 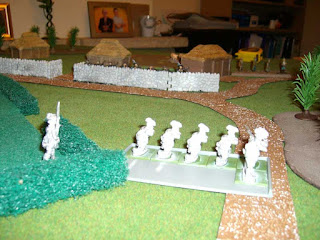 Fortunately the Regulars kept the Canadians busy for a while with their stubborn refusal to break, so the Indians had chance to slip across the left side of the board  and nab a scouting objective for the top corner.

Here are the Indians slipping there way up the left flank - 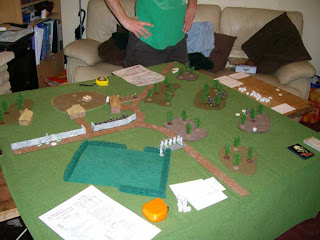 Meanwhile on the right flank, an epic fight between the 6 Rangers and a unit of 7 Canadians was brewing. Sight was finally gained between the units and shots rang out in the woods. A couple of early hits pushed the rangers back, but they came forward again(next turn) and managed to shoot a couple of the Canadians and then get the drop on the Canadians with a charge. Melee was very brutal. The 4 British Rangers butchered the rest of the Canadian force without taking a hit back. I don't know what Stu did here, but his dice just died completely. Mine, unfortunately for him were suddenly on fire. 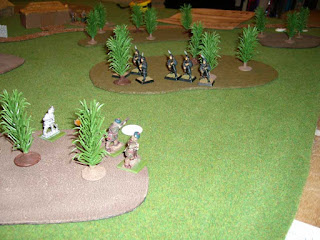 The rangers pushed on and secured the other top objective point. At this point we went onto the next turn(3)

I needed to get off the board from my edge, with my forces now.yet still kill more Canadians to make him take reaction to get my side plot. Stu need to kill 6 more of of my men to end it this turn.

The Indians and Canadians took all their activations speeding down the flanks back to my board edges.

In the center battle raged, with the Canadian forces taking the edge. They killed all my remaining Regulars and the Provincials then gunned down my officer at point blank range. Fortunately for me though before this occurred I had taken out enough of the Canadians and his officer to make him require his morale card to be added to the deck next turn. So was mine though. He needed to kill one more figure to win outright there, but had run out of actions to do so.

The next turn started and The British got lucky and headed back to their lines with Indians and Rangers. the Indians left the table, Then the fates intervened - The Canadian morale card came up. His units held, and the dice were kind, but it was too late, next card saw the rangers leave the table.

Final score was - Decisive Victory to the British.

It may of said decisive on the tin, but man it was so close to not being one.

We did not use all the optional rules and left a few other bits out too as it was our first try at these rules (Stu had not even read them) but as I say, we both greatly enjoyed it. I think it can only get better from here.

Thanks for reading this. Any comments or thoughts are more than welcome,