We had our second game last night. Again another really enjoyable time. A few more rules were added (or remembered) and it played out pretty smoothly.

The forces this time were 210pts (why the odd extra ten? well my figure collections nicely point up at that score for both factions, Oh and my French are here I have just had one of those weeks since my last post where between life and the snow I just have had no time to do anything fun).

Mission - Slaughter, Side plot - I will never forget his face (The French Indian squad leader)

Here is the table all set up and ready, with the figures ready to deploy  - 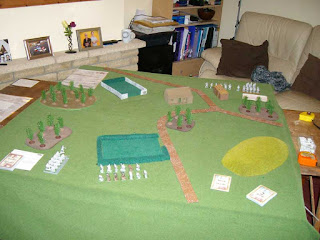 The Civilans deployed their officer in the WIP Perry farmhouse, and the bunch of 8 sat by the barn behind some light fencing.

The British put their regulars and officer coming up the road, the Indians took the left flank through the woods and the Rangers advanced across the central field.

Most of the first turn consisted of movements, with an couple of incidents of note.

The regulars pushed the civilians back with some long ranged fire, killing two and making them flee (no actions for them this turn as their cards both ended at the bottom of the deck)

The rangers managed to creep right up upon the officer looking out the doorway, and shoot him down from their vantage point in the centre wood.

The Indians advanced into the big woods on the left.

The French had a bit of a mixed bag of a turn. The Indians came on the (my) right flank behind the barn and into the woods there. They did pick off a Regular, who stood firm (I noticed barring bad dice these guys are very hard to shift)

The Chasseurs advanced up the left flank taking cover in the field behind the stone wall.

The Marines and their officer went Irregular for the game, and moved across the centre next to the barn.

Their firing was petty good and another Regular British fell, where upon they recoiled (ah said bad dice roll).

Overall it was a bit of an odd turn. 3 civilians dead versus 2 British regulars. Of course it wouldn't be one of our games with out extreme oddness to come.

Here are the positions after turn 1 - 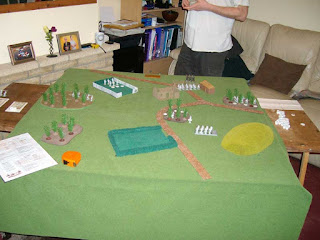 Here are the fleeing Civilians 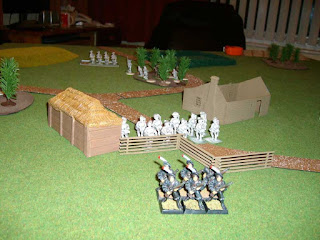 Look at those sneaky Indians. "where? I can't see them). The view from the recoiled regulars. 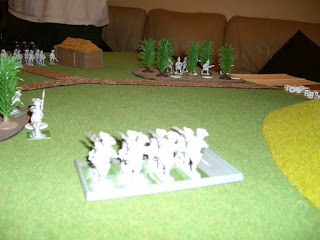 Meanwhile the sneaky British allies do their Indian thing, hoping to hold off the Chasseurs. 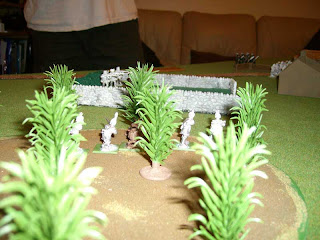 Game turn two began after I went and made the tea while Stuart shuffled the deck. Now the oddness began.
Somedays randomness is just weird to the max.

Basically The first load of card that turned where all French. Then the next Load of cards were all French, and the next. Somehow Stu had managed to shuffle the deck (you can see him doing it in the end of turn 1 photo) and get all bar 1 Indian card onto the top of the deck.

The result of this, was basically he did a lot of movement and shooting and reloading while I drunk my tea lol.

The civilians moved into cover behind the barn, the Chasseurs took up position behind the wall shooting one Indian, The Indians blasted my regulars down to two men (who still refused to budge) and the Marines shot my Rangers taking them down to 3 men.

Finally the Britsh cards arrived. Now I knew I had the majority of the activations coming up, so played to my missions -

The Rangers advanced trying to get to the civilian unit and also to push the Marines back, only their aim was clearly shaken and they failed in this task.

The Regulars and the Officer went head long straight at the Indians, The troops ready to sacrifice themselves for the Officers life if need be. they got to 2" from the Indians and the officer prayed next turn cards would arrive so he could charge his side plot nemesis.

The Indians on the left moved into point blank, shot at the Chasseurs, killed just one, then Threw their tomahawks, felling another before harging into melee, 5 Indians vs 4 Chasseurs.

A bloody combat ensued, With the Indians killing all the Chasseurs  for one loss.

Sadly the Turn was at an end. The British Morale card was plugged into the deck as losses where high enough from this turn.

Here is the table at the end of turn two- 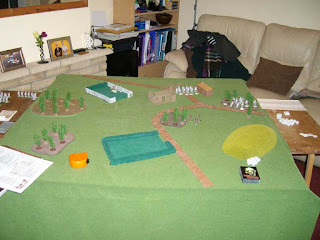 The regulars and their officer are ready for a rumble with the Indians. 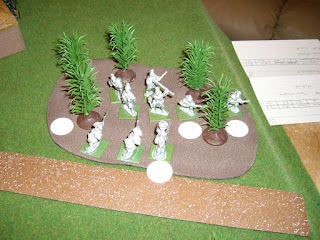 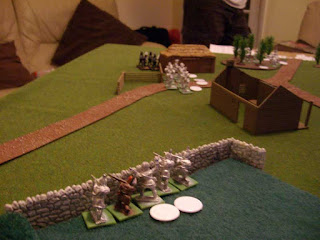 The depleted Rangers tough it out in the open, oh dear! 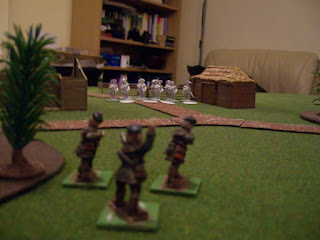 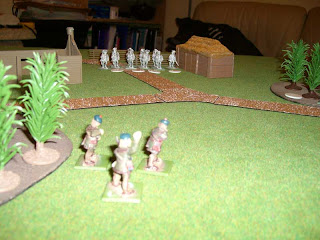 The next turn Began. It looked good for a minute. The British Indians went first and unleashed a couple of shots at the distant Civilians. Sadly no hits were forthcoming and with that my slim hopes were dashed -

On the other flank, The Indians got a reprieve and their card came out before the Officer could charge home. They unleashed some Tomahawks, killing the two Regulars, and fled back through the woods. They really did not want to have to fight my officer in hand to hand it seems. (this was the funny result of stu's side plot)

The Officer got the next action and moved slowly through the woods desperate to catch them and avenge his (side plot) honour.

Next up came the British Morale. Oh Oh! 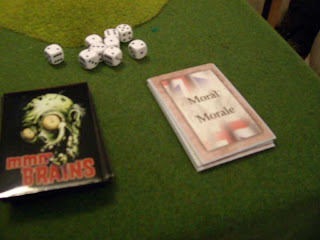 The Brave Rangers only fled. Hah so no activations for them.

We called it a game here. A Major Victory for the French was declared.

What a great game it was. It ebbed and flowed from one side to the other. More shall be coming soon.

I will also add some pics of the French too when I get a chance, More great Front rank figures.

Again Comments and suggestions are more than welcome, finally, here is the shot of the end table, see those rangers run.... 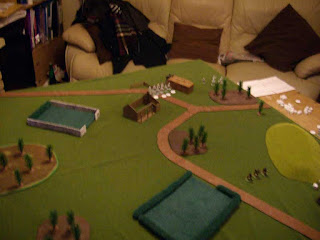